The Wolseley automotive story began in 1895 when a 30 year old Herbert Austin who was the works manager of the Wolseley Sheep Shearing Machine Company Ltd, succumbed to the late Victorian fascination with the internal combustion engine and the horseless carriage.

Over the winter of 1895-96 he went about making an improved version of a Léon Bollée design he had seen in Paris.

It later transpired that the rights to the Bollée design had been purchased by another British group leaving Herbert Austin little choice but develop his own design.

Resembling an invalid chair, the second car built by the Wolseley factory was a remarkable design. Apparently very simple, the Wolseley Autocar No. 1 featured independent rear suspension and back to back seating for two adults - however none were sold at the £110 asking price due to potential customers preferring four seaters.

In the same year the company's founder Wolseley himself passed away, Wolseley cars built it's first Austin designed 4 seater. The car featured a single horizontal cylinder, wrap around radiator tubes and a chain drive to the rear axle. This car was later entered in the spring 1900 Thousand Miles Trial winning its class, after which replicas were offered to the public at £270, the first production Wolseleys.

The next major development came in 1901 when Vickers Engineering and Hiram Maxim purchased the motor-manufacturing side of Wolseley for £12,400 and capitalised it as a new company.

The Wolseley Tool and Motor Car Company Ltd. Herbert Austin was given a financial stake in the new company in return for his patent rights, and he stayed on as general manager.

The Wolseley Tool and Motor Car Company Ltd was active in motor racing and profitable until 1903 when production reached 800 cars per year.

After this point five years were to pass before the company returned to profit, even with the patronage of Queen Alexandra.

Herbert Austin finally left Wolseley in 1905 to found his own company, AUSTIN and the Directors appointed J.D. Siddeley (Later of Armstrong-Siddeley) as his replacement.

Siddeley's first move was to purge the old horizontal engine designs of Austin along with the expensive racing programme.

This left only the more modern Siddeley designs, and from then on Wolseley motor cars were sold as Wolseley-Siddeleys.

In 1909 Siddeley left Wolseley for Deasy, and late in 1911 the Siddeley name was dropped to avoid confusion with Siddeley-Deasy (Later Armstrong-Siddeley).

The period saw some interesting products from Wolseley, including in 1910 motor sleighs for the Ill fated Scott Antarctic expedition and the Deutsche Antarktische Expedition.

1912 saw what was probably the most unusual vehicle ever, the two wheeled Gyrocar sponsored by the Russian Count Peter Schilovski.

By 1913, Wolseley was one of the largest makers in the UK, with 5500 workers producing nearly 5000 vehicles per year.

Wolseley spent the great war years making mainly aero engines complete planes and Aeroparts There was also a small number of trucks, and large numbers of Arms and Munitions.

After the armistice, Wolseley was left with 13,000 workers and a potential output of 20,000 cars per year. £1.7 Million of stock was issued to finance the re-equipping of the factory for peacetime production and sales offices were opened in many parts of the world.

Unfortunately the post war demand for the expensive Wolseleys did not match expectations, even though production of 12,000 cars made Wolseley the biggest British manufacturer.

Wolseley struggled on until 1925 suffering from enormous annual interest charges of £140,000 and a public who preferred the cheap Morris Cowley and Ford Model Ts.

In 1926 the receivers disclosed the company was bankrupt to the tune of £2 million, one of the most spectacular failures in the early history of the motor industry.

William Morris purchased the ailing company for £730,000 early in 1927, beating off competition from great rival Herbert Austin and General Motors.

A strong motivation for the purchase being the cylinder OHC engine and the extensive engine experience of the Wolseley engineers needed to expand the Morris range up market. This 6 cylinder engine spawned 4,6 and 8 cylinder variants, and the was the basis of the later OHC MG engines. However, the Wolseley company was still allowed a degree of autonomy, and continued to produce unique Wolseley vehicles while drawing on the expertise of the Morris in making pressed steel body work.

1932 saw the introduction of the illuminated radiator badge that was to be the hallmark of the marque until the end of production in 1975.

After the end of war hostilities, the first Wolseley cars off the production line were of pre-war designs. The 10hp, Series III, and one new model - the Wolseley 8 which was an upmarket version of the Morris Series E.

The Wolseley 8 ushered in the final loss of Wolseley's autonomy, where new Wolseleys were to be modern Nuffield body designs with traditional Wolseley front ends and trim.

The new Wolseley 4/50 and 6/80 of 1948 were both of monocoque construction and based essentially on a scaled up Morris Oxford MO. The Wolseley 4/50 and 6/80 featured new OHC 4 and 6 cylinder engines respectively - shared only with the Morris Six variant. However post war austerity meant the plush pre war Wolseley interiors were a thing of the past.

Production began at Ward End in October 1948 with 99 4/50s, 19 6/80s and 5 Morris Sixes being built before January 1949 when production was shifted to the Nuffield works in Cowely.

1952. saw the introduction of the 4/44, a sleek Gerald Palmer designed vehicle saw a return to the more sumptuous Wolseley interiors of the past. The new 4/44 was the last to use the 1250cc XP Nuffield Engine (as in the MG TD) This was a result of the April 1952 merger of Morris and rivals Austin into the British Motor Corporation and the rationalisation on the use of the Austin engines for all new BMC production.

1954 introduced the new Gerald Palmer designed 6/90 prestige model, a replacement for the 6/80. The 6/90 is considered to be the final Nuffield Wolseley, being unrelated to any Austin, although it shared body styling with it's Nuffield stablemate the Riley Pathfinder. The 6/90 was also the first car to feature the new 2639cc BMC C series engine.

In 1956 the last of the Wolseley/Nuffield powered vehicles rolled off the production line, with the 4/44 being replaced by the outwardly similar but B series powered 15/50.

April 1957 saw the introduction of the Wolseley 1500 powered by the B series engine. Other than the 1500 the body was only shared with the Riley 1.5 Noted for its performance, particularly in the Riley version, the 1500 was a luxurious low cost 50s GTi. 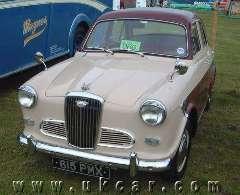 In 1958 BMC adopted a new corporate style created by the Italian House Pinin Farina - partly to quell the infighting between the rival Austin and Morris design teams.

The first BMC Farina was the A40, which was never produced in a Wolseley variant. This was closely followed by the larger Wolseley 15/60 saloon, a square replacement for the curvaceous Palmer designed 15/50. Available in Wolseley, MG, Riley, Morris and Austin variants, the series was badge engineering in the extreme. Each marque was differentiated by their respective nose treatment - confined to grille and bonnet, as well as different trim levels suitable for the market positioning of each marque.

1959 saw the Wolseley 6/99 replace the range topping 6/90. The new 6/99 drew on the main mechanical components and body engineering of the Austin A95 - thus signalling the final end of the Nuffield Wolseley.

The 6/99 had all the basic dimensions increased over the A95, and a more powerful version of the C-series engine. Despite appearances, the `Big Farinas' shared no body or mechanical parts with their smaller 4 cylinder 15/60 kin and the increase in body dimensions gave the Big Farinas' somewhat better proportions.

The `Big Farina' was available in three marques, Austin, Wolseley and later as Vanden Plas Princess 3L (and later 4L with a Rolls Royce 4L Engine), all variations on the same basic shell. The differences between these prestige models were more expansive that those permitted with the smaller 4 Cylinder Farinas, with differences in bonnet, front and rear wings, grille, front panel, lighting and trim.

1961 dawned with the arrival of the mini derived Hornet, featuring an enlarged boot, tiny wing fins and a traditional Wolseley grille. Far better trimmed than the standard minis, the Hornet and her sister the Riley Elf brought luxury to the small end of the car market.

1962 saw the birth of the eternal BMC 1100/1300 range from the drawing board of Alec Issigonis, designer of the Morris Minor and Mini. However the Wolseley variant did not hit the streets until 1965, it replaced the 1500.

1968 marked the end of the big Farina, with the last 6/110 MK II - a direct descendent of the 1958 6/99 (plus 2 inches of wheelbase, 10 bhp and a plushier interior). There was no replacement model and the large prestige Wolseley was consigned to the history books. However the Farina styling still struggled on with the smaller Wolseley 16/60,

Another Wolseley Six would appear briefly between 1972 and 1975.

1968 also had other implications for the future, with BMC and Leyland merging to form British Leyland at the request of the British government.

The seventies began with the gradual winding down of the Wolseley marque as British Leyland concentrated on its other core brands. There were only two new Wolseley models introduced in the early part of the decade, the Wolseley Six replacement for the 18/85 - essentially the 2.2 OHC litre six from the Austin Maxi squeezed into the 18/85 shell, and the Wolseley Wedge 18/22. The Marque then marched model by model into oblivion.

The final outing of the once proud Wolseley name was on the shortlived Wolseley `wedge' 18/22. and its sister Austin and Morris variants in 1975. The entire range simply became known as `Princess' in 1976, and for the first time in 79 years there were no Wolseleys in the showrooms.