Willys (pronounced "will-eeze") was the brand name used by the US company Willys-Overland Motors, best known for its production of military and civilian Jeeps.

John North Willys in 1908 bought the Overland Automotive Division of Standard Wheel Company and in 1912 renamed it Willys-Overland Motor Company. From 1912 to 1918 Willys was the second largest producer of automobiles in the United States behind only Ford Motor Company. 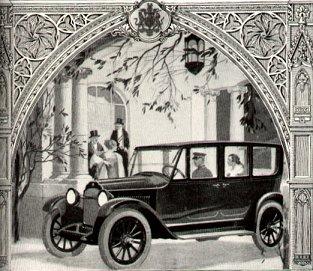 1920 Willys-Knight advertisementThe Electric Auto-Lite Company was acquired by John Willys in 1914 and he changed its name to the Willys Corporation in 1917. This became the holding company for Willys-Overland and in 1919, acquired Dusenberg Motors Corporation. In 1936 Willis-Overland Motor Company was reorganized as Willys-Overland Motors. In the 1920s and 1930s, Willys was an unremarkable automaker based in Toledo, Ohio, one of dozens in the U.S. It was one of several bidders when the Department of the Army sought an automaker who could begin rapid production of a lightweight truck based on a prototype designed by American Bantam.

Production of the Willys MB began in 1941 with 8,598 units produced that year, and 359,851 units were produced before production stopped at the conclusion of World War II. Soldiers called it a "Jeep" based on a phonetic pronunciation of the abbreviation GP, from "General Purpose", that was used as part of the official Army nomenclature.

Willys switched production to a civilian version, called a CJ-2a, at the end of the war. The CJ-2a was an MB stripped of obviously military features, particularly the blackout lighting, and with the addition of a tailgate.

Willys struggled to find a market for the unusual vehicle, and made an effort to sell it as an alternative to the farm tractor. Tractors were in short supply having been out of production during the war. Despite this, sales of the "agri-Jeep" never took off, mainly because it was too light to provide adequate draft.

However, the CJ-2a was among the first vehicles of any kind to be equipped with four wheel drive from the factory. It gained popularity among farmers, ranchers, hunters, and others who needed a lightweight vehicle for use on unimproved roads and trails.

Willys later produced the M38 Jeep for the U.S. Army, and continued the CJ series of civilian Jeeps. The same basic chassis and driveline was built with a pickup body, and with a station wagon body.

In 1953 Kaiser Motors purchased Willys-Overland and changed the name to Willys Motor Company. The company changed name again in 1963 to Kaiser-Jeep Corporation. The use of the Willys name was discontinued in 1965. The company was sold to American Motors Corporation (AMC) in 1970 when Kaiser Industries decided to leave the automobile business. After the sale, AMC used engines it had developed for its other cars in the Jeep products to improve performance and standardize production and servicing.

Renault purchased a major stake in AMC in 1980 and took over operation of the company, producing the CJ series until 1986. Chrysler purchased AMC in 1987 after the CJ had been replaced with the Jeep Wrangler, which had little in common with the CJ series other than outward appearance. DaimlerChrysler still produces Jeep vehicles in Toledo.