The Whippet car had a short but surprisingly successful sales history. A product of the Willys-Overland Co. of Toledo, Ohio, it was introduced late in 1926 as a 1927 model to replace the Overland, which had not really appealed to buyers in the low-priced field. The name was derived from the Whippet dog and was meant to denote a vehicle that was small yet swift. 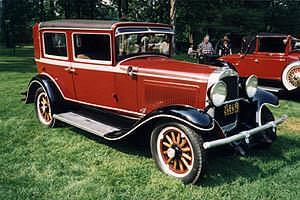 Indeed, the Whippet was small, said to be America's smallest car, having a wheelbase of only 2546 mm (100.12 in.), and a 30 horsepower four-cylinder side-valve engine with just 2.1 litres (130 cu in.) of displacement. But the swiftness would be achieved more by the six cylinder Whippet introduced early in 1927.

One of the sixes was taken to the Indianapolis Motor Speedway where it averaged 91 km/h (56.52 mph) during a 24-hour endurance run, establishing a new American record for cars costing under $1,000. It was advertised as "the world's lowest-priced six."

The Whippet got off to a good start selling 110,000 cars during its first year. Continued success helped pull the Willys-Overland company into third place in sales in 1928 behind Ford and Chevrolet. And it was a pioneer in the popular priced field by offering a convertible with wind-up windows as early as 1927, although Ford had produced its soft top Model T Coupelet model with lift-up windows beginning in 1915.

Willys-Overland was one of the first manufacturers to recognize the importance of exporting. By the early teens the company that traced its beginnings back to the first Overland in 1903, was selling cars in some 37 countries. It also built cars in Canada.

Willys-Overland took over the old Russell plant in Toronto after the Russell Motor Car Co. went out of the car business in 1915. Willys built cars there from 1916 to 1933, with a brief interruption during World War I to make aircraft engines.

The Canadian Willys-Overland plant produced Whippets, and only the Canadian plant could build both left-and right-hand models, probably because of its relatively small production rate. The Toronto factory built the right-hand drive Whippets for export to countries such as Australia and New Zealand where vehicles were driven on the left side of the road.

In this era of "smart switches" and powered push-buttons, we tend to think we have the latest in gizmos, but the Whippet had a pretty slick gadget, too. It was called "finger tip control," a button in the centre of the steering wheel that not only sounded the horn when pressed, but also switched on the lights when it was turned clockwise - parking first, then headlamps - and activated the starter when it was pulled.

Unfortunately, all of the wiring connections for this magic button were located at the bottom of the steering column under the carburetor where it wasn't shielded from dripping gasoline. The result was numerous fires and frequent re-wirings. Needless to say, right-hand drive Whippets didn't suffer the same fate.

The Whippet had a rear fuel gauge located on the left end of the gasoline tank, a not uncommon feature of that era. It also had four-wheel mechanical brakes, although it appears that the company didn't quite finish engineering the system; some had external contracting bands on the rear wheels and internal expanding ones at the front.

Although Willys-Overland did very well with the Whippet, selling 315,000 in 1928 and 242,000 in 1929, it, like many others, suffered badly with the 1929 stock market crash and ensuing Depression. The company shifted its emphasis to one model in the lower priced field, the Willys 77, really a reworked Whippet, and discontinued the Whippet name early in 1931.

The parent company in Toledo was in deep financial trouble and the Toronto operation ceased production of Willys cars, including the very quiet running sleeve-valve Knight-engined Willys-Knight, in 1933.

The U.S. operation would later be revived and would go on to gain fame by building hundreds of thousands of Jeeps during World War II, and then successfully converting this sturdy military general purpose vehicle to civilian use. The Jeep was the product that would enable the company to survive; it was taken over by Kaiser in 1953, followed by American Motors in 1970, and most recently by Chrysler in 1987.

The Whippet had come on the automotive scene quickly, had sold well for a short time, and had disappeared just as quickly. It is still remembered by many people, however, as the car whose name was inspired by a dog.