After flirtations with electric vehicles and radial engined motor cycles, he finally settled for a "proper" Léon Bollée designed horizontal engined motor car. 1900 saw a change to vertical engines and an expansion of the range to include a 12 hp twin cylinder. A four cylinder 20 hp with pressed steel chassis was introduced for 1902. Darracq was in the forefront of pioneers of mechanical inlet valves, L-head engines, pressed steel chassis and proper location of back axles using torque control arms. 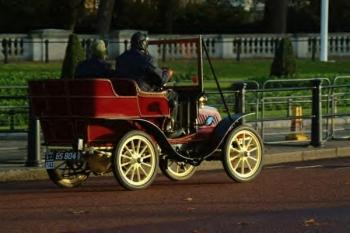 The star of the film "Genevieve" was a Darracq. 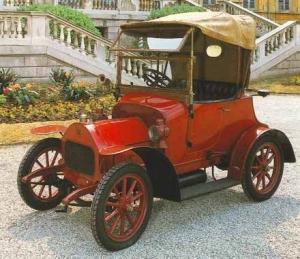 In 1912 the firm succumbed to the vogue for abolition of the poppet valve with a near disastrous range of rotary valved cars under Henriod patents. In 1913 Alexandre Darracq sold out again, this time to the British financial interests who had previously taken over his British subsidiary. A prime mover in this take over was Owen Clegg, who moved to Paris to become Managing Director of the new company, with a capital of 20 million francs and its head office and works at 32 Quai Général Gallieni in Suresnes, Paris. During the Great War, Darracq went over completely to munitions production: weapons, ammunition and even complete aeroplanes - in greatly expanded premises, of course. The initial post war Darracq was a mildly updated version of the pre-war side valve 4 cylinder 3 litre Type V to be joined by Owen Clegg's 24cv side valve 4½ litre V8 Type A in 1920. However in 1919, Darracq took over English Talbot (Talbot dated from 1903 when Charles Chetwynd-Talbot, the Earl of Shrewsbury, Waterford and Talbot, had begun importing Clement-Bayard parts and assembling Clement-Talbot cars in a factory at Ladbroke Grove in the West of London) and the resulting company merged in 1920 with Sunbeam to form the Sunbeam Talbot Darracq group which quickly came under the strong influence of the personality and ideas of Sunbeam's Breton director, Louis Coatalen. 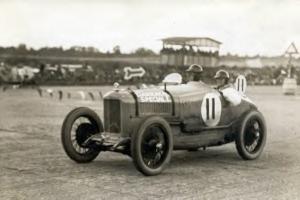 From late 1921 and the introduction of the Louis Coatalen inspired 1½ litre ohv Type DB, the Suresnes built cars were renamed as Talbot in France, although still badged as Darracq when imported into Britain. Owen Clegg's Type A was consigned to oblivion in 1922. Using the design work of Vincenzo Bertarione and Walter Becchia, who had been poached from Fiat by Louis Coatalen, Suresnes built the fabulously successful series of 1½ litre 2ohc "voiturette" racing cars, variously badged as Darracq or Talbot-Darracq or Talbot, from 1921 to 1927 with numerous class, and sometimes overall, victories at Brooklands and on the continent. Meantime the touring range built at Suresnes was expanded with the pushrod ohv 2120 cc 4 cylinder DS and the 6 cylinder 2538cc DUS and 2912cc TL. The range took a new direction in late 1927 with the introduction of the 6 cylinder 1,997cc M67, replacing all of the 4 cylinder models and later spawning the larger K74, K75, P75, K78 and M75 6 cylinder models. Owen Clegg finally succeeded in re-introducing an eight cylinder into the range in 1929 with the 3822cc H78 Pacific, which was as spectacularly unprofitable as its Type A ancestor.

The Suresnes works struggled on through the depression until 1934 when there was a last spasmodic attempt to revive the brand by adopting a pointlessly pretentious "Packard" style radiator cowling and a thoroughly effective and practical independent front suspension system patented by Coatalen in 1929.

Then Anthony Lago arrived at Suresnes. Born in Italy, he trained as an engineer, rose to the rank of Major in the Italian army during the Great War and re-invented himself as a director of the Wilson Self Changing Gear Co Ltd in the 1920s. He joined the Sunbeam board in the early thirties and, as the STD group started to founder financially, he seized his opportunity to re-finance, or in modern parlance lead a management buy-out of the Suresnes part of the group.

His impact at Suresnes was immediate and effective. He fired Bertarione and promoted Walter Becchia. He re-introduced an attractively raked version of the traditional Talbot radiator and rationalised the range around a six cylinder image – Owen Clegg's straight eights were half-heartedly updated with i.f.s. but only staggered on until the stocks of built cars were remaindered in 1935. The range eventually was composed of cars built with a choice of three wheelbases, the Baby at 2.95m, the Master at 3.20m and the Major at 3.45m into which could be fitted a choice of vertical pushrod ohv 6 cylinder engines of 1997cc, or 2696cc, or 2996cc, or finally 3996cc. So, according to the depth of your wallet, you could order a Baby with an engine of two litres, or three litres or 4 litres. Only the smaller engine sizes came with a "silent" 4 speed gearbox. As could be expected from his background, and the source of his royalty income, the three and four litre cars were universally fitted with the Wilson pre-selector gearbox. This of course was available as an extra cost option on the smaller engined cars. A range of appropriately elegant and stylish bodywork was produced by the factory for these cars – two and four seat cabriolets and two and four door saloons.

One of Lago's mainsprings was his enthusiasm for competition and, even while he was engaged full time in putting the production range in order, he was planning a return to the race track for Talbot. His initial efforts centred on the T150C, effectively an uprated 3 litre Baby with the cylinder head re-designed in light alloy to provide hemispherical combustion chambers using asymmetric rockers operating inclined valves, but retaining a single camshaft and parallel pushrods. This head boosted the power output from 80bhp to 110 bhp. Capacity was soon increased to 3996cc for the Automobile Club de France's "Formule Sport" in 1936 and output eventually approached 200bhp for the engines fitted to the 2.65m wheelbase Lago SS models in 1937 to 1939. These cars had a distinguished competition career, winning numerous continental "sports car" events and the TT at Donington in 1937.

Their chassis provided a base for some of the most fabulously elegant of pre-war French coachwork. This was not just for show however, a Figoni et Falaschi "goutte d'eau" coupé finished third at Le Mans in 1938. After WW 2 Lago was quickly off the blocks with the mostly new 4½ litre 170bhp Lago Record, on whose design he had been working since 1942. The capacity of the new twin camshaft engine with short vertical pushrods to provide the hemispherical combustion chambers had been chosen with a view to the 1½ litre supercharged / 4½ litre unsupercharged Grand Prix Formula anticipated post war.

The Lago Record followed on the Talbot tradition of the thirties of providing relaxed high speed touring in works coachwork of great quality and elegance, at the expense of less than nimble handling and a fairly ruinous fuel consumption. It was joined by a 4 cylinder 2.7 litre Baby version in late 1949. Its initial success rapidly tailed off as the motoring public realised that 2.7 litres could not do the job of 4.5 litres, given the modest reduction in wheelbase from 3.1m to 2.95m.

Lago had by this time taken his eye off the ball somewhat to concentrate on his efforts in what was now Formula 1. The 4½ litre Record engine was extensively re-designed in 1948 in light alloy to give the engine for the T26C Grand Prix single seater and its two seat sports T26GS derivative. Talbot built some sixteen of these cars which were campaigned by the works and by private owners from 1948 to 1954, sometimes in competition with Lago SS or T150C cars from the thirties, updated by private owners who found they could still be competitive.

Later versions of the engine with twin ignition eventually produced some 250bhp. A T26C driven by Louis Rosier won the Belgian Grand Prix in 1949 due to being vastly more economical than the 1½ litre supercharged cars, some of which were burning fuel at six times the rate of the Talbot. Rosier won Le Mans in a T26GS in 1950 after driving all but two laps himself. From then on it was downhill for Talbot. The firm went into administration in 1951, but falling sales due to the French fiscal regime for luxury cars prevented a recovery. The 4½ litre Grand Sport coupé gave way to its scaled down 2½ litre sister, the T14LS in mid 1955 but even the lighter tubular chassis and beautiful body of this car could not keep Talbot afloat. A final attempt was made in 1959 to capture sales in the American market with a BMW V8 engined version of the T14LS, the Lago America, which was finally built with left hand drive. Despite good press notices, this failed miserably and the remains were eventually sold to Simca, who finished off the few Lago Americas in the works by fitting side valve Ford V8s as provided in their Vedette saloons.