The H & C Studebaker blacksmith shop opened in 1852 at the corner of Michigan and Jefferson Streets in what is now the heart of downtown South Bend, Indiana.

Henry and Clement Studebaker's blacksmith shop would turn into the Studebaker Manufacturing Company in 1868, and would eventually become the largest wagon manufacturer in the world. Studebaker would also be the only manufacturer to successfully switch from horse-drawn to gasoline powered vehicles.

John Mohler Studebaker returned from California in 1858 where he made wheelbarrows for gold miners, and invested his earnings in the business. At this time, the brothers were filling wagon orders for the U.S. Army, and would continue to do so throughout the Civil War. By 1887, sales would eclipse two million dollars, and by 1885, production would top 75,000. 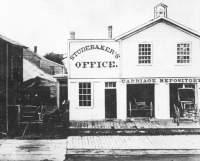 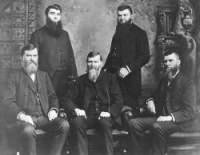 Studebaker eased their way into the automobile market after the turn of the century, introducing an electric car in 1902. Gasoline-powered Studebakers came in 1904, produced by the Garford Company in Ohio, marketed under the name Studebaker-Garford. In 1911, Studebaker would join forces with Everitt-Metzker-Flanders Company of Detroit to form the Studebaker Corporation. Studebaker sold automobiles under the EMF and Flanders names until 1913; from thereafter, all new cars carried the Studebaker name. Studebaker was still producing wagons, and would do so until 1920, at which time automobile production was moved from Detroit to South Bend. 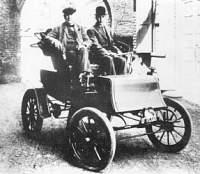 During this time, Studebaker built automobiles in the medium-price-field. In 1927, Studebaker introduced the Erskine; a small car designed for the European market, and purchased luxury automaker Pierce-Arrow. The Great Depression, combined with questionable management decisions lead to Studebaker going into receivership in 1933. They would emerge from receivership under Studebaker Vice-Presidents Paul Hoffman and Harold Vance.

Throughout his career at Studebaker, Raymond Loewy produced many of the revolutionary designs that Studebaker was famous for.

Raymond Loewy's relationship with Studebaker began in 1936. Raymond Loewy Associates held the Studebaker account from 1936-1955, with the first RLA designs being the 1938 models. RLA would also style the successful 1939 Champion, which marked Studebaker's first successful foray into the low-priced field.

The Amphibious Weasel was used widely by the United States in World War II.

Defense contracts during World War II had Studebaker building B-17 Flying Fortress engines, US6 6x6 military trucks, and the M29 and M29C "Weasel". 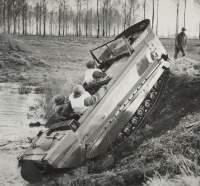