Thomas B. Jeffery built and sold Rambler bicycles in Chicago from 1878 to 1900. He was one of America's first men interested in automobiles in the late 19th century, and in 1897, he built himself a motor car.

Jeffery was serious and visionary enough about cars to buy a plant in Kenosha, Wisconsin, where he planned to manufacture automobiles on a large scale. His experimental prototypes of 1900 and 1901 used at least two radical innovations - steering wheels and front-mounted engines. But by the time Jeffery was ready for production in 1902, his father had talked him out of these wild dreams and convinced him to stick with tillers and engines under the seat. 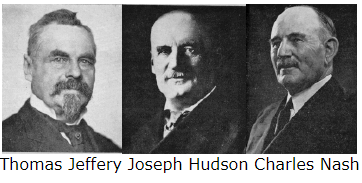 From 1902 until 1908, Jeffery moved steadily to bigger, more reliable models. His cars were built on assembly lines (the second manufacturer to adopt them -- Olds was first), and in1903 he sold 1350 Ramblers. By 1905, Jeffery more than doubled this number. One reason may have been because he went back to the steering wheel before 1904.

In 1907, he was building a large variety of different body styles and sizes. Among them was a five-passenger, $2500 Rambler weighing 2600 pounds and powered by a 40-hp engine. Cars were beginning to look like cars by then.

Jeffery died in 1910, and his son Charles took over. That same year, Joseph L. Hudson and seven business associates began producing a competing motor car called the Hudson. It was an immediate success, selling for $900-$1700 and eventually earning a solid reputation for quality and safety. But for the moment, Hudson and Jeffery were in two different camps.

The Hudson Motor Car Company, founded in 1909 and building its first cars in 1910, hit 17th place among manufacturers by the end of its first production year. Sales were about 5000. Rambler sales for the same period were some 2500 cars -- a self-imposed limit "in the interest of quality." Rambler built by far the more impressive automobile.

In 1911, Rambler offered an adjustable steering pillar, not unlike the modern multiple-position columns. Hudson brought out a "simplified chassis" and a four-cylinder en bloc engine with the magneto and water pump on a single drive. Hudson also had one of the first multiple clutch arrangements that year.

J.L. Hudson died in 1912, undoubtedly as contented with his cars' success as T.B. Jeffery. Two years later, Rambler's name was changed to Jeffery, in honor of the company's founder. After Hudson died, Roy D. Chapin headed the firm. Chapin had already helped found a motor company: Thomas-Detroit (later Chalmers-Detroit). He stayed with Hudson until his death in 1936, serving under Herbert Hoover in 1932 as Secretary of Commerce.

During the war years of 1914 to 1918, Hudson became the world's largest manufacturer of six-cylinder cars. Jeffery (soon to be Nash), became the world's largest producer of trucks. Jeffery had brought out a four-wheel-drive "Quad" truck in 1911, and this proved very popular with foreign governments for military use. During World War I, Jeffery Quads and Nash Quads played an important role for the Allies, and by 1918, 21,494 of these trucks were built under Army contract.

Charles W. Nash, in 1916, resigned his post as president of General Motors and took over the Jeffery Company. Next year, the first Nash made its bow, powered by an ohv Six. Concurrent with the Nash debut, Hudson organized the Essex Motor Car Company, which from 1919 until 1932 built light, spirited models. Essex' appeal was to the performance-minded and price-conscious -- in 1921 it offered a closed coach for only $300 more than its touring. In 1924, when six-cylinder cars were highly prized, it brought out a Six for less than $1000. Also in 1924, Hudson had reduced its coach to only $5 more than its touring car. 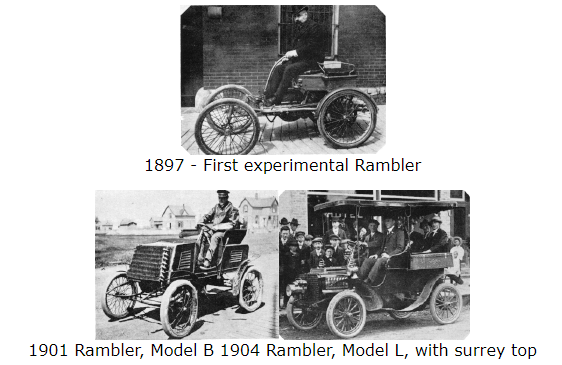