In Germany 1948, Fritz Fend (a former aircraft designer) introduced the Fend Flitzer. This was a single seater invalid vehicle which formed the basis of a two seater version.

The Fend Kabinenroller FK 175 (The Messerschmitt 175) Fend had approached Professor Willi Messerschmitt along with his idea for a two seater version. Messerschmitt offered the facilities of his factory in Regensburg and it was there that Messerschmitts were made.

The first "Flitzer" Messerschmitt was introduced in 1953 after appearing at the Geneva Salon in March of the same year. The Messerschmitt stands at just over 4 feet from the ground and has a monocoque construction.

The top of the vehicle was hinged to allow access and the passenger seat was directly behind the driver. The reason for this it was said was to improve the aerodynamics of the car rather than having the wider twin seats at the front combination.

The two front wheels were controlled by handlebars and it had a single driven wheel. When Messerschmitt was asked to summarise his design in one word he replied, "weglassen" - a paring down of all but the essential parts. This can be seen in the vehicle with the small engine size that is compensated for by the body shape which helps minimise aerodynamic drag. At the time other 3-wheelers were far from aerodynamic. There was a legend that Messerschmitts were built from modified surplus cockpits for ME 109's but looking at the appearance this is false.

Large numbers of KR200's were sold worldwide until production stopped in 1964. It is estimated that about 6,800 were imported into the UK of which about 1000 remain. 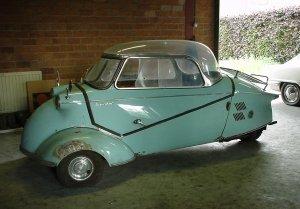