Financial backing for the Jordan Motor Car Company brought Edward S. (Ned) Jordan, whose background was in advertising, to Cleveland from his native Wisconsin in 1916 to produce his new automobile. In its fifteen-year history, the Jordan factory in Cleveland turned out more than 43,000 cars.

Rather then making its own components, the Jordan Company assembled cars using parts from reputable manufacturers. For instance, Continental Motors of Detroit supplied the engines to Jordan's specifications, while the aluminum bodies were custom built. While Jordan produced good, reliable cars, they were not especially powerful or innovative. Their real distinction was in styling, which was slightly rakish and daring with nicely appointed interiors, and colors bearing such exotic names as Blue Devil Blue, Burgundy Old Wine, and Egyptian Bronze.

Jordan prospered by offering an honest car at an honest price and from Ned Jordan's gift for innovative advertising. Ned Jordan's car and his ads appealed to the young and carefree buyer and the buyer who wished to be thought of as such. Jordan's milestone Somewhere West of Laramie, copy for the famous Playboy model advertised not so much the car as the places it would take the driver. Automobile advertising was forever changed as specifications and capacities gave way to emotions and possibilities; an automobile wasn't just a mechanical device; in Jordan ads, the driver had an exciting lifestyle, and the Jordan automobile was the perfect fit of that lifestyle, whether it was riding the open highway or taking a jaunt to the local country club.

By 1929 the glory days of the Jordan Car Company were over. Production peaked in 1926 with 11,000 units sold that year. By the late 1920s automobile competition had become fierce, with large automakers able to cut costs and prices and offer installment buying, while smaller manufacturers, like Jordan, could not. In 1927 Jordan introduced the Little Custom, a luxurious compact car which was a commercial failure, because at the time Americans were not willing to pay a fairly high price for a fairly small car. Ned Jordan's personal life was also deteriorating; a divorce and division of assets occurred in 1928. The company underwent reorganization in 1928 and 1930, and suspended production in 1931.

Though it struggled during its last few years, the Jordan Motor Car Company produced some of its finest models during that time, including this 1929 Speedboy dual-cowl phaeton, which is reported to have been specially-built as a wedding present for Jordan's daughter, Jane. The couple took the car on their honeymoon in Europe. The Grotenrath family of Chesterland, Ohio owned the car until 1948 when the Thompson Products Auto Album, predecessor of today¹s Crawford Museum acquired it for $350. Interestingly, in 1930, as a show of support for a Cleveland area manufacturer and customer, Thompson Products purchased 425 shares of Jordan stock.

In 1970, the Cleveland Automobile Dealers' Association sponsored a complete restoration of this one-of-a-kind Speedboy for the Crawford Auto-Aviation Museum. Mechanics from the Lester Tire Company took the vehicle apart, and found that car was in much worse condition than had been originally thought, so a complete frame-up restoration was made of the vehicle. After its restoration, the car participated in a number of Antique Automobile Club of America tours around the Midwest. 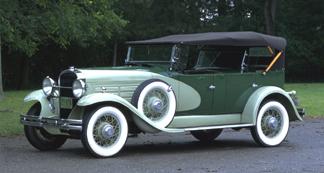