The Hupp Motor Car Company was organized in 1908 and began producing its first automobiles shortly thereafter. Founder Robert C. Hupp had the ambition of producing a smart, reliable motorcar, which offered far more than the very basics of the period, and of producing this car at an economical price.

Each early Hupmobile bore the words Guaranteed for Life, right on the car’s nameplate and the Hupp was a reliable car for its day, as well as offering as regular features many items considered optional or even unobtainable for most other cars. In 1909, the year this lovely two-passenger Hupp roadster was produced, the company’s advertised slogan was The smartest and best little car ever marketed in America at anything like the money! When one considers that the snappy little car offered good road performance from a four-cylinder, 2O~horsepower engine, a folding windshield, elliptical-spring suspension, Pres-To-Lite headlamps and kerosene side and tail-lamps, artillery-type wheels, repair kit, tool kit and tire pump, all for $750, it is obvious that the slogan meant what it said.

This 1909 Hupmobile roadster has a long local history, but the original purchaser is unknown. The late Matthew Black, known for years as Municipal Councilor for Two Creeks, who used the car on his rounds for the Rural Municipality of Wallace, purchased it second-hand in 1918 or 1919 for $15. The car was purchased years later by Mr. Clarkson and restored prior to being housed in the Museum. In fine running order today, this car was Mr. Clarkson’s first restoration and so is the foundation piece of the Museum’s collection. 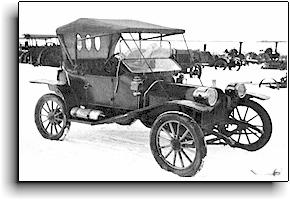