On July 3, 1909 the first Hudson model "20" rolled off the assembly line in Detroit, Michigan. The car bore the name of its new manufacturer's primary financial backer, J. L. Hudson -- founder of the department store empire that still exists to this day as Dayton-Hudson.

The first Hudsons were, like most early makes, "assembled cars". Most components (including engines) were purchased from outside suppliers and simply "assembled" in the company's main factory. As the years passed, however, Hudson made an ever-increasing percentage of its own components "in-house": engines, bodies (when even GM and Ford "subbed out" their bodies), transmissions and differentials, to name but a few. 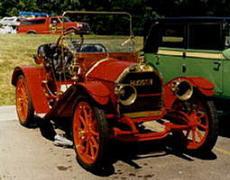