The Essex automobile appeared in 1919. This was a lighter and less-expensive Hudson, designed to compete in the lower price range, just above the level of Ford and Chevrolet. In 1922, when open cars were still the norm, Essex introduced its coach, the first mass-produced, competitively-priced closed car. GM's Alfred P. Sloan called this an event that profoundly influenced General Motors and Ford. 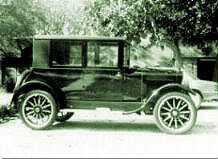 This 1923 Essex coach is virtually identical to the 1922 model