The Avanti - Born in Palm Springs

By the end of the 1950's Studebaker was in serious trouble. Studebaker President Sherwood Egbert had been hired to turn around the company. Even in his initial discussions with the board about the president's job, he had proposed a radical new car. On one trip, during a lay-over at Chicago's O'Hare Airport, he bought some car magazines and, somewhere between Omaha and Denver he began sketching ideas. On March 9th 1961, he contacted Raymond Loewy and asked him to design a new car for Studebaker.

Within ten days Raymond Loewy, John Ebstein, Thomas Kellogg and Robert Andrews were working at a rented house in Palm Springs. Within two weeks they had finished the 1/8th scale clay model.

On April 2nd, Egbert flew out to Palm Springs to view the final clay model and the final drawings. With only a few minor changes, he toasted the new car with a soft drink, and said, "Let's go!"

The 1/8 scale clay was shipped back to South Bend Indiana for Robert Doehler and the Studebaker styling crew to work on. The two-seater design became a four seater. The windsheild pillar was made more upright when Egbert bumped his head while getting into the seating buck. The "Coke bottle" shape was moderated. The assymetrical hood bump was borrowed from some of Loewys early sketches for the Avanti. The taillights were modified to make them easier to produce, and the quad-headlights were changed to single headlights to reduce cost. By April 27th, the full-sized clay was done.

Studebaker's budgets limited the performance/suspension options. The frame for the Lark convertible was chosen and beefed up to support the Avanti's fiberglass body. For performance, the front coil springs from the Lark heavy duty police package and rear leaf springs from the Lark station wagon were chosen with heavy duty shock absorbers added as well. The Avanti was the first American car to feature disc brakes. It used Bendix units made under license from Dunlop, the same brakes that Jaguar had been using for years.

The top of the line Studebaker 289 made only 225 Horsepower. It was tuned up to deliver 240 horsepower. Fortunately, Studebaker had just acquired Paxton, and with it came an a belt-driven centrifugal supercharger good for 300 horsepower and Paxton President Andy Granatelli, who had a few ideas on how to promote the Avanti's performance image.

Many names were considered for the Avanti including revivals of the name Packard and Pierce-Arrow. No one knows who first came up with the name Avanti. Some credit the D'Arcy Advertising Agency and some credit Sherwood Egbert. Whoever thought of the name, it was Raymond Loewy who designed the final Avanti script nameplate.

The prototype was ready in just under a year and was unveiled on April 26th 1962. 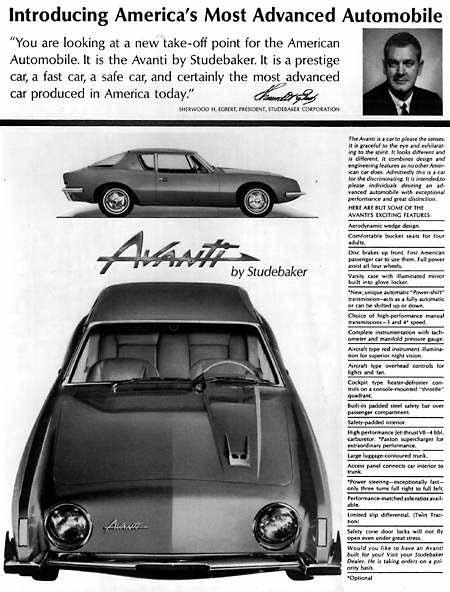