The Amphicar was built in Germany from 1961 to 1968. Total production was 3,878 vehicles. The Amphicar is the only civilian amphibious passenger automobile ever to be mass produced. 3,046 Amphicars were imported into the United States between 1961 and 1967.

The Amphicar is rear engined and uses a 4 cylinder British-built Triumph Herald motor producing 43hp. All Amphicars are convertibles, and the civilian models were originally offered in only 4 colors, Beach White, Regatta Red, Lagoon Blue and Fjord Green (Aqua).

The backbone of the Amphicar's electrics is basically a Lucas 12 volt positive ground system with certain items such as the horn, lighting and switches made by other manufacturers such as Hella and Bosch.

The Amphicar has a top speed of 7mph on water and 70mph on land. Hence, it was dubbed the "Model 770". The Amphicar is moved in the water by its twin nylon propellers. A special two-part land-and-water transmission built by Hermes (makers of the Porsche transmission) allows the wheels and propellers to be operated either independently or simultaneously. The "land transmission" is a 4-speed-plus-reverse unit similar to those found in the old Volkswagen Beetles. The "water transmission" is a 2-speed offering unique to the Amphicar featuring single forward and reverse gears. In the water, the front wheels act as rudders.

When new the Amphicar sold for between $2,800 and $3,300, depending on the year. Later model years actually sold for less than those of early years. No 1968 model year Amphicars were directly imported into the USA. This was because of the U.S. Government's EPA and DOT regulations that went into effect beginning with 1968 model year vehicles. This caused a major financial disaster for the Amphicar Corporation since the USA represented about 90% of all Amphicar sales. The Amphicar factory in Berlin, Germany closed for good in 1968, and the remaining inventory of unused parts was eventually purchased by Hugh Gordon of Sante Fe Springs, California. Hugh's Gordon Imports remains the Amphicar owner's primary source for spare parts. 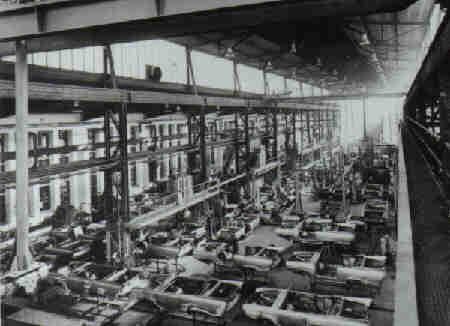