The Austin Motor Company was founded by the late Lord Austin (then Mr Herbert Austin) in 1905 with a capital of £15,000. Austin was not new to motor manufacture for he had previously been with the Wolseley Company and had designed his first car - a 3 wheeler - in 1895.

From that small beginning - the first factory occupied 2.5 acres and produced 120 cars a year. The company has expanded until today it is one of the biggest in Europe, producing vehicles at the rate of over 3,000 a week. The payroll has grown from 270 to 18,000 people. In the intervening years it has produced some famous motor cars, notably the Austin Seven, which introduced a new standard of small car motoring for the family man.

Today the company is controlled by one of the most dynamic figures in British industry, Mr L.P. Lord.

Austins have not spread their increased production over various makes of cars by acquiring other car producing firms. They have, however, obtained coachbuilding facilities for the luxury models by acquiring the old established firm of Vanden Plas. In addition, the company own a half share in Austin Crompton Parkinson Electric Vehicles Ltd., producers of battery-electric vehicles.

After the war, when exports became a first priority in the policies of British motor firms, Austins courageously tackled the North American market and, in spite of tremendous obstacles, they have succeeded in getting a foothold in what is surely the most difficult motor car export market in the world.

The Austin plant now occupies 120 acres of the original site at Longbridge, 7 miles from Birmingham. In their centralised plant Austins claim that more of the complete process of car manufacture is undertaken than in any other British factory. Since the war, Longbridge has been the scene of a drastic reorganisation, which has as its aim, the re-housing and re-equipment of many departments. A new engine factory has already been completed, also a new tool factory, a new designs department and a new development section. The next big step - the building of a new chassis-erecting, body-mounting and finishing shop is now being carried out. The reorganisation programme will be continued until the whole plant has been reconstructed in a series of self-contained factory units. During the 12 months ending on 31 July, Austin produced 157,628 vehicles of all kinds, one quarter more than the total output in the preceding 12 months.

An unusual sideline is the production of toy Austin cars in a South Wales factory which is sponsored by the company. The workers here are disabled miners and the project has humanitarian considerations as its primary object.

(see pic of the plant below)

No company in the British motor industry has thrown itself into the national export drive more wholeheartedly than Austins, and few have been as successful, particularly in the difficult hard-currency markets. This success has not been achieved accidentally; it has been the calculated result of bold vision and driving force at the top, coupled with thorough organisation in every detail.

In 1946 the Austin Company started a separate concern, the Austin Motor Export Corporation Ltd, to handle and develop overseas trade. Furthermore, subsidiary companies were also formed in the most promising export markets - the United States, Canada, Australia and South Africa. CKD cars are assembled in Australia, New Zealand and South Africa, and cars are also sent packed to distributors in all overseas markets. Austin's export programme has been waged with consistent vigour and it has been the aim of the company to provide adequate spare parts and maintenance facilities simultaneously with the development of new markets. This has meant an enormous outlay, notably in the United States and Canada.

Products of the Company

Austins do not at present make a "baby car", although Mr Lord has publicly stated that the company has such a car in mind and that, if and when it is produced, it will be an Austin Seven. Meanwhile, the smallest model is the A40 with a 1200cc engine. This car has been an outstanding success since its introduction in 1948 and the reasons for its popularity are not hard to see. It carries a roomy 4-5-seater body and is exceptionally lively and fast for a car of this type. The A40 will reach a genuine 70 mph and, in a record run on an American airfield track, it broke many American stockcar records at over 60 mph. More recently a perfectly standard model covered 10,000 miles in as many minutes at the Montlhery track near Paris, breaking several International class records for 1500cc cars in doing so. The A40 saloon can be obtained with either 2 or 4 doors and is also sold at a lower price without certain accessories.

The next Austin model, the A70, has also earned for itself an enviable reputation although not on such a wide scale. This 2.2 litre, 4 cylinder car, fitted with a roomy saloon body, is a good representative of the new type of medium sized cars which British manufacturers have developed with much success since the war. Like the A40, it is unusually fast, being capable of exceeding a timed speed of 80 mph and providing a rate of acceleration in top gear previously associated only with 6 or 8 cylinder cars of much greater power. It is also outstanding for its riding comfort. The high qualities of the A70 were demonstrated to the world when a standard model was driven by two Englishmen from London to Capetown in the record time of 24 days 2 hours. Only those who have travelled over this route can appreciate fully what this performance entailed. The roughest desert tracks had to be taken at merciless speed and the car received no respite from its continuous pounding.

The A90 is a development of the A70, having a slightly larger engine and a higher top gear ratio. This model too has proved its worth in a public demonstration of speed and reliability. An Atlantic convertible was driven day and night for a week, round the Indianapolis Speedway in the U.S., breaking numerous American stockcar records in the process. The average speed for 7 days and nights, including all stops, was 70.54 mph. The same Atlantic convertible broke the 5 mile record for 3 litre open stockcars at just under 90 mph. The A90 is sold in two forms, a convertible and a sports saloon. The convertible can be obtained with a power-operated head.

The largest Austins are the A125 Sheerline and the A135 Princess. These cars have the same mechanical specifications except with regard to the 4 litre, 6 cylinder engine, which in the Princess, is tuned to give more power as is indicated in their model numbers. The Sheerline is a handsome saloon with conservative lines, including external headlamps. It is designed for the owner driver and can be fitted with bucket or bench-type front seats. The bucket seats are flush fitting and can be adjusted to form the equivalent of a bench seat if desired.

The Princess has a graceful coachbuilt saloon body made by Vanden Plas and has a partition between the front and rear seats. Its performance is in keeping with its modern lines and the car can reach 90 mph in good conditions. The large Austins provide a very high standard of quiet and comfortable motoring and, in a subtle way, combine the characteristic handling qualities of British cars with trans-atlantic top gear flexibility and acceleration. 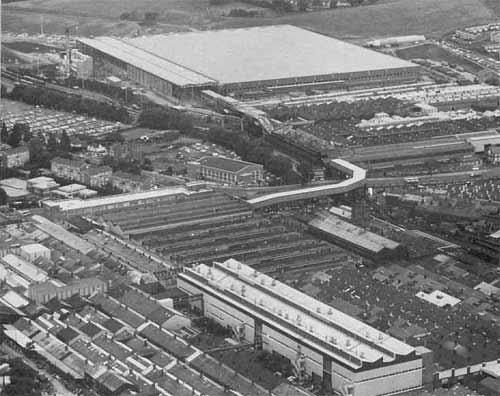